In the dark ages enemies clashed on open ground with flail and ax. Warriors surrounded themselves with solid sheets of metal to keep their assets, such as muscles and organs, intact. When managing a business one must equip similar protections of a slightly lighter material.

Anthony Parsons owned a small business that developed a software to rival the image manipulation capabilities of Adobe Photoshop. His company employed three people besides himself; Richard Fleck his on-call driver, Vicki Thompson accountant and secretary, and Jeff Moody assistant programmer. Anthony’s company recently felt the joy of first profit, and their current project was expected to launch their business into the public eye. The software development was three years along when Anthony discovered Jeff and Vicki had been dating outside of work. After an explosive fight Jeff stormed from the office disrupting a meeting Anthony conducted in the next room. Anthony fired Jeff. When Jeff was informed he was fired he decided that the code he wrote would stay in his possession and would be used to create his own version of their project. Next he knew Anthony sat in a court room charged with wrongful termination. When the judge asked about his policies on inter-office relationships a lump coalesced in his throat and he knew he had lost it all. Anthony had no way to prove that Jeff’s conduct was not allowed by his company. 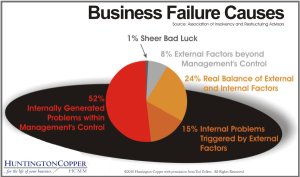 Even if your business opened its eyes yesterday, it is important to protect its future. In tightly knit companies the illusion of loyalty is a common occurrence. However, when a person’s employment is compromised and they are unsure where the next rent check will come from all bets are off. In his blog Chris Nesbitt posts this graph, which is accredited to the Association of Insolvency and http://www.huntingtoncopper.com/blog/?Tag=fluctuating%20economy Restructuring Advisors (AIRA), to highlight that over half of failed businesses could have been rescued by correct management. But sir, what are these problems that I, as a business owner, should be watching for? An article titled “Frivolous Lawsuits: A Serious Threat to Nation’s Small Businesses” has a section called ‘having employee agreements up front.” Here a Fiducial representative Steve Feinberg relates that frivolous lawsuits are most likely to come from upset employees. These lawsuits, which could easily erase your income from last quarter, are easily quashed with the proper precautions. Like the humans that power them, businesses are at their most vulnerable when they are young. Establishing policies sets a good foundation on which to grow, and acts as insurance in case of disaster.

If the law comes into the picture common sense does not take the place of evidence. In Anthony’s situation he could have been fully protected by setting down an employee fraternization policy and a work-for-hire/intellectual property policy. Creating an Employee Policy Manual acts as proof for the understanding between employer and employee. Policies clarify who owns the work done by an employee, and who the employee can share this information with (trade secret agreement). Michael Lightfoot is a seasoned veteran in the field of tech-business law. With him behind your banner everything your business needs to be safe will be forged by a master craftsman. Office space, computers, and software are all sound investments when building your empire but investing in solid policies cover them all in armor and leave your mind free to worry about more important things. . .like vacation.

Written in collaboration with
Will Spears,
Atomic Cocktail Magazine

Nesbitt, Chris. “The #1 Cause of Business Failure.” November 19, 2010.
http://www.huntingtoncopper.com/blog/?Tag=fluctuating%20economy